Trending
You are at:Home»Fun»Feeling the Warrior Rush in Boom Beach
By feed on September 10, 2014 Fun

Have you tried out Boom Beach from Supercell? They’re the amazing developer behind Clash of Clans and Boom Beach is their follow-up game. It’s set in a sort of World War II era environment, but the object is pretty much the same: attack your enemies, defend your base, build up lots of resources.

The game continues to be popular and months after release, it’s still a top grossing game on the Apple App Store and Google Play charts.

There are lots of options when it comes to assembling your army, but we’re going to clue you in to one critical strategy: just go with Warriors. Don’t waste your time with anything else.

The basic strategy is called the Warrior Rush, and it really comes into its own once you have leveled up in the game and acquired the Smoke Screen capability. Coupled with the Smoke Screen and Flare, Warriors make for a quick and effective strategy. Here’s how it works: 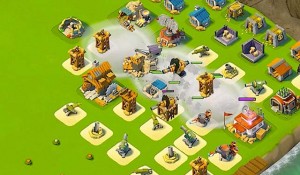 The Warriors sneakily approach the HQ under the cover of multiple Smoke Screens.

The Warriors will quickly unload their fury on the HQ, healing themselves as they attack. In most cases, this attack is sufficient enough to quickly take out the enemy Headquarters and claim victory, along with lots of resources. Rinse and repeat for quick domination in Boom Beach!